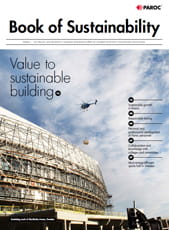 Paroc redefined its strategy during 2012 and sustainability was included as a central part of the corporate strategy. Paroc Book of Sustainability 2012 describes the company’s economic, social and environmental impacts to its stakeholders and surroundings.

In 2012, Paroc set as a strategic target to be 30 per cent more energy efficient by the year 2020, and has already initiated concrete measures to reach this target. Clear decrease of CO2 emissions was achieved already during 2012. Operative efficiency is closely monitored and each plant has its own energy efficiency project for the years to come.

“Zero waste to landfill” project initiated in 2011 has produced visible results: during 2012 Paroc managed to cut down waste to landfill with as much as 3,000 tonnes compared to 2011. The Trzemeszno plant in Poland does not landfill any waste, and the Hällekis plant in Sweden as well as Parainen in Finland follow suit with under 10% of waste going to landfill. The production waste can be re-used for different purposes. Paroc’s aim is to reach 100% material efficiency, which incorporates the minimising of production waste.

During 2012 Paroc initiated its first plant construction in Russia. It has been the biggest single project of Paroc so far. The project is proceeding according to plans, and the commercial production is planned to start up in November 2013.

Paroc experienced significant improvement in occupational health and safety during 2012. The accident frequency was reduced by over 50 per cent. The company also initiated new projects on OHS and invested on personnel and leadership training. The company´s occupational safety target is zero accidents by the year 2020.